Slovenia is a small country in the heart of Europe. Until 1991 it belonged to Yugoslavia, since then Slovenia has been an independent state. In 2004, the Alpine country became a member of the European Union. As the first nation of the former socialist states of Eastern Europe, Slovenia introduced the euro as a means of payment in 2007. Despite several economic crises, Slovenia is considered one of the richest countries in Eastern Europe. 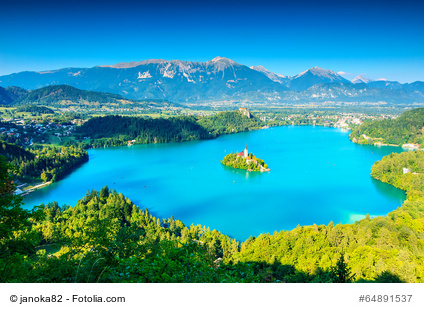 More and more tourists are coming to the small country between the Alps and the Mediterranean. Winter sports enthusiasts, especially skiers, come in large numbers to the mountain regions. Winter resorts such as Kranjska Gora are known throughout Europe. The short coastline of Slovenia (length only 47 km) is popular with vacationers in summer. Some of the coastal towns have a long tourist tradition with many luxury hotels. Piran with its grandiose old town is one of the pearls of the northern Adriatic. On the Slovenian coast you can find some great beaches.

Triglav National Park is located in the Alps in the north-west of the country. It is popular with hikers and skiers. Here are the highest mountains in the country. Some peaks are almost 3,000 meters high. There are several famous lakes in the region. The most famous is Lake Bled (see picture above). Bled and the lake have been a popular vacation destination for more than 100 years. Many Austrians come here, the border is less than 20 km away. A bit more remote is Lake Wochein (Bohinjsko Jezero in Slovenian) in the Triglav National Park in the Alps. This is a meeting place for hiking enthusiasts and nature lovers. For many vacationers, climbing Triglav, the highest mountain in Slovenia, is a highlight of their vacation. The locals say that only people who have once stood on the top of Triglav really know Slovenia. The mountain is something like a national shrine.

Slovenia has only about 2 million inhabitants. The three big neighboring countries are Austria, Croatia and Italy. In addition, there is a short border with Hungary and a few kilometers of coastline on the Mediterranean Sea. Most vacationers come from Germany, Austria and Italy. Slovenia is small. The national territory covers only about 20,000 km². This makes the country 4 times smaller than Austria or 17 times smaller than Germany. The area of the nation is about the same as an average German state like Hesse. The population density is less than half that of Germany. In Slovenia you can find a lot of untouched nature.

Slovenia’s Lipizzaner horses are world famous. It is one of the most famous horse breeds on earth. The mostly white animals come from the village of Lipica, not far from the Adriatic coast. Because of the horses, the village of Lipica has become a tourist attraction. Similarly famous are the country’s stalactite caves. Postojna Cave is perhaps the most famous cave in Europe and actually a “must see” for every Slovenia vacationer. Also huge castles and famous thermal springs attract visitors from all over the world to the small Alpine republic.

Enjoy reading the travel information about Slovenia. At the top of this page you will find a menu. It is divided into general information and description of individual places.