Ljubljana is a city worth seeing. Although Ljubljana was partially destroyed by an earthquake in 1895, we think it is one of the most beautiful capitals in Europe. The capital of Slovenia has more of its own character and individuality than other cities. You get the feeling that you have never seen a city like this before. Perhaps this is due to the fact that large parts of the city centre have been designed by an architect and thus form a certain unity. The city architect Joze Pleznik built many striking buildings in the centre in the first half of the 20th century. For the people of Slovenia, Pleznik is a national hero.

The most important and striking building in Ljubljana is the castle. This gigantic structure towers directly above the old town. It is probably the only important sight in Ljubljana that cannot be reached on foot in minutes from the centre. 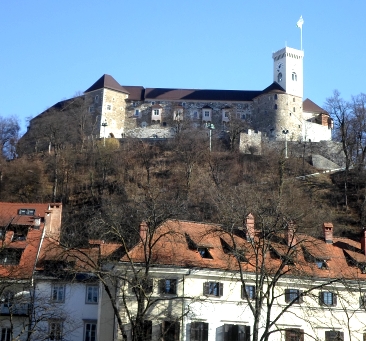 The 25-minute walk up to the castle is steep and strenuous. Much easier is a trip to the “Ljubljanski grad”, as the castle is called in Slovenian, by cable car. The cable car between the old town and the Grad (castle) takes the many tourists comfortably to the top in just a few minutes. The cable car, including admission to the castle there and back, now (year 2019) costs an impressive 12 euros for adults. Unfortunately, the price has risen sharply in recent years. However, you can also go up for only 2.20 euros (without visiting the inside of the castle) and walk back down. A return ticket for the cable car costs 4 euros. There are, as usual in Slovenia, discounts for children, families, students, etc. In the 16th century castle, visitors are shown some exhibitions and film screenings. But what fascinated us most was the magnificent view of the city from above.

The Ljubljana Card is a great thing for tourists. With the ticket, you can use public transport in Ljubljana for free, have free admission to almost all museums and to the zoo. Also the funicular to the castle, the entrance to the castle, a guided city tour and much more are included.

The central square in Ljubljana is Presernov Trg with the famous three bridges next to each other over the small river Ljubljanica. The square, like many sights in the centre of Ljulbljana, is a visual masterpiece. It was designed, how could it be otherwise, by the architect Joze Pleznik.

Several other bridges are among Ljubljana’s top sights. One is the Zmajski Most with its four famous dragon figures. Even more famous is the covered Shoemaker’s Bridge. The Butcher Bridge is the bridge of lovers. As on some other famous bridges in Europe, lovers attach a padlock to the bridge railing. There are now many thousands of locks. 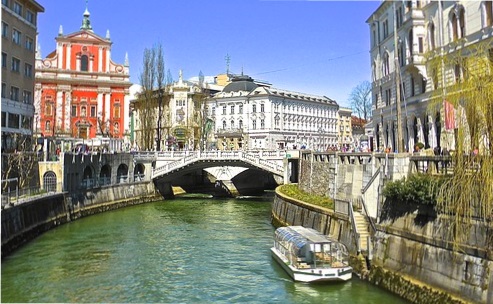 The large churches are also worth a visit. We especially liked the Stolnica Cathedral with its famous holy entrance door “Santa Porta” (see picture below). A highlight in the history of the church, which is also called St. Nicholas Cathedral, was the visit of Pope John Paul II in 1996, just a few years after Slovenia’s independence from Yugoslavia. 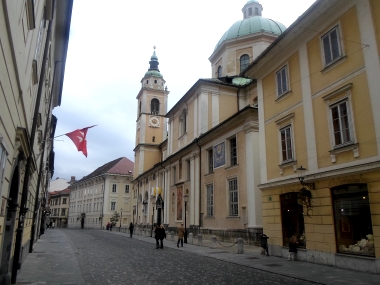 All the sights described above are a stone’s throw from each other, except for the castle. 300 metres further east are the modern Parliament, the National Museum of Slovenia, the National Gallery and the Opera.

But the most beautiful thing in Ljubljana, in our opinion, is the flair with the many street cafés in the small pedestrian zones on both sides along the small river Ljubljanica in the centre of Slovenia’s capital. The old town in the south of the city centre is also worth an extended walk.

The city centre is also an experience in the evening and at night. The castle and other buildings such as those around Presernov Square are impressively illuminated. Many stylish bars are open until late at night. The nightlife in Ljubljana also has style.

A great city is also Lucca Italy in Tuscany, with many sights.

In Ljubljana, as the city is called in old German, various providers offer city walks and city tours through the capital of this small country.