The city of Ljubljana is known for its bridges. Especially five bridges over the small river Ljubljanica are mentioned again and again. They are bridges from different eras and different architectural styles. 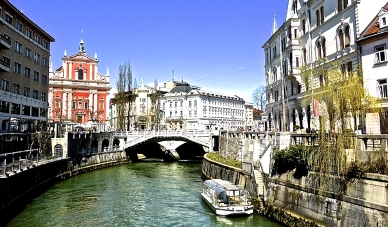 If you take a trip on an excursion boat on the Ljubljanica, you can also admire the bridges from below. All five bridges presented here are located directly in the city centre, a maximum of 400 metres apart.

The Ljubljana Card is a great thing for tourists. With the ticket, you can use public transport in Ljubljana for free, have free admission to almost all museums and to the zoo. Also the funicular to the castle, the entrance to the castle, a guided city tour and much more are included.

This is the most famous bridge in Ljubljana, actually there are three bridges next to each other. They are right at the most central point of the city, Prešeren Square (Prešernov trg). This square is also home to Slovenia’s most famous monument, the Preseren Monument. France Prešeren (1800 to 1849) is Slovenia’s best-known writer. He wrote mainly love poems. He is so important in Slovenia that the anniversary of his death is now a public holiday. 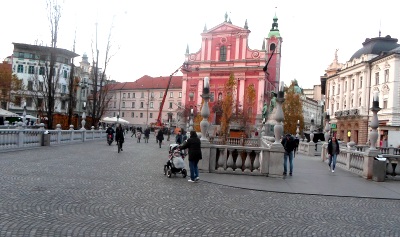 On the site of today’s triple bridge, a wooden bridge spanning the Ljubljanica River had stood since the late Middle Ages. This wooden structure was destroyed several times, mainly by fire. In 1842 a solid stone bridge was built, which today is the middle one of the three bridges. A lot of traffic used to pass over this bridge, so in 1931 it was decided to extend the bridge to a triple bridge. The architect Jože Plečnik added one bridge to the left and one to the right. The area has been a pedestrian zone for about 10 years.

Joseph Melan, a professor from Vienna, developed a new theory (deflection theory) that greatly simplified the construction of bridges. It states that floating structures with large weights have a self-stabilising effect under certain conditions. Moreover, the roadway on the Dragon Bridge was the first asphalted road in what is now Slovenia. At that time, the region belonged to Austria-Hungary. 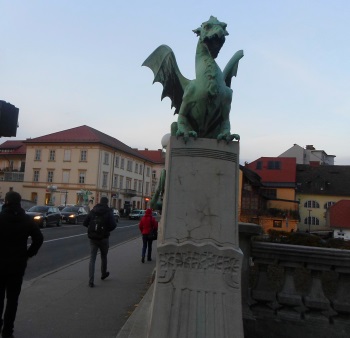 The dragons and other elements in the Art Nouveau style were added later. The four large, green dragons made of copper are the emblem of Ljubljana. They are by the artist Jurij Zaninović from Croatia. Equally beautiful are the lamps on the bridge, which used to be gas-powered. The Zmaj (dragon) is the emblem of the city of Ljubljana (old German name for Ljubljana).

The Shoemakers’ Bridge, like the Three Bridges Bridge described above, was formerly a wooden bridge and was rebuilt as a stone bridge by the architect Jože Plečnik. The Cobbler’s Bridge is about 100 metres south of the Three Bridges. It connects the central squares of Old Square (Stari Trg) and New Square (Novi Trg) near the main university building. 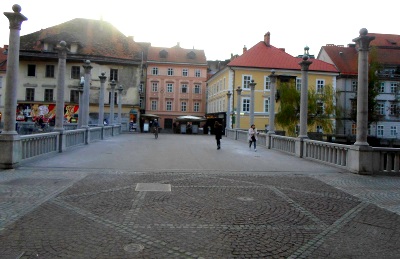 The Cevljarski most, as the Shoemaker’s Bridge or Shoemaker’s Bridge is called in Slovenian, was built in the early 1930s. The architectural style, including the railing and lamps, is typical of Joze Plecnik, who built many other structures in Ljubljana. Today, the Shoemakers’ Bridge is part of the pedestrian zone of the capital of Slovenia. The name goes back to the shoemakers who practised their craft on the old wooden bridge in past centuries.

The Butchers’ Bridge is a new bridge that was ceremonially opened in 2010. It is located at the market in the capital Ljubljana. 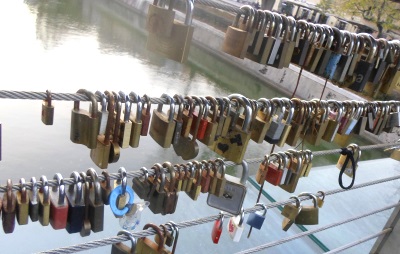 Since the opening, couples in love have been attaching padlocks, mostly with engraved names, to the ropes of the Metzgerbrücke bridge railing. There are now many thousands of locks. The structure is also called the Butcher’s Bridge in German or, more rarely, the Schlacher Bridge.

The Charles Bridge in Prague is one of the most famous bridges in Europe. It also includes the Chain Bridge in Budapest.

Since 2012, there is another pedestrian bridge over the Ljubljanica in the city centre. Since it is on the square of the old fish market (Ribji Trg), it is often called Fishmarket Bridge. 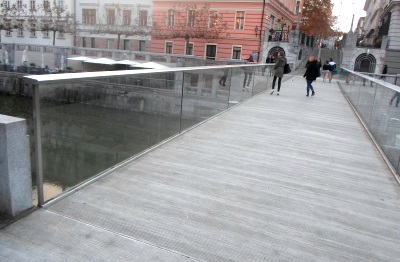 The architects have created a successful, modern structure that integrates well into the cityscape.

There are many more bridges in Venice: Our article